This morning I awoke to hear my middle son shouting excitedly, "Let's try it like this and see what happens!" This was with relation to the construction of a huge Roman villa made with chairs, blankets and whatever other building materials could be found around our house. There has been a loose Roman theme to the last few days which has involved reading about the exploits of Caractacus, Boadicea and Agricola, googling pictures of Roman soldiers, making a model Roman centurian .... Today we moved into volcanoes, clay models which we plan to erupt tomorrow using vinegar and bicarbonate of soda. Hmmm ..... The teacher in me thinks maybe a Pompeii link could be forged between these two topics! 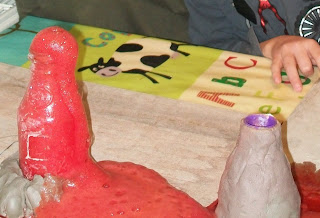 So far great moments have been my middle son's face lighting up as he managed to connect an electrical circuit and make a radio function, the diligence and perseverence with which his elder brother worked at creating his clay volcano this afternoon unhindered by any time pressure, the care my middle son is taking of his younger brother and the help he offers him so freely, all three boys working together co-operatively with less aggression and more companionship, a lot more laughter in our home.

OK, so it's early days, but the biggest change in this whole venture has been my attitude with regard to living and learning together. Instead of having my agenda, my list of things I need to accomplish today, which the boys could hinder me from doing, such a lifestyle means at its simplest involving the boys in what we are doing and being involved in what they are doing, so tasks are accomplished corporately. Since they have more control over what they choose to do, I have found them far more willing to go along with the things I need to get done. They all sat quiet and still through a half hour meeting I needed to attend this morning, and have been helpful in clearing up behind themselves. It is easy to involve them (and even to incorporate some practical maths and writing) into planning meals, shopping and baking. My husband and our middle son enjoy cooking, so this has led to some great times in the kitchen together.

Rather than running around to the agenda imposed upon our household by school, we are more in control of how we spend our hours together. We do not have the stressful rush of the morning, trying to get them all ready and, sometimes unwillingly, out of the door. We do not return grumpy and tired to one another at the end of the day, rather we have the best of the boys' day to learn together. And they are more relaxed.

We have a growing list of things to do and buy ....
Wood glue,
Visit the tip to look for pram wheels,
Dye for tie-dying,
Build a den in the garden,
Sand and newspaper for jurassic landscape, planned to be built up around the volcanoes for toy dinosaurs to roam .....
Never a dull moment.