It was SATs week this week, so my middle son's former classmates (aged 6-7) were completing the assessment tests they have been preparing for. The scores will tell them / their parents / teacher / school / the Government at what level they are performing in Speaking & Listening, Reading, Writing, Mathematics and Science. Are they above or below average? Is their teacher / school succeeding? Will they continue to make progress? To make sure, they will be tested again before they leave primary school, when they are 10 or 11. But is this really the most effective way of assessing children? Or is the pressure to achieve good SATs results narrowing the curriculum in our primary schools, and reducing children to facts and figures for school & Government measures of success or failure?
Sometimes people ask me how I structure our home educating day / week. One of the things I am having to get used to is being able to go with the flow, and not being too bound by a schedule as each day / each week is different. This week was a particularly busy one, but I thought running through it would give some idea, as well as providing a contrast to the week most 6-7 year olds in our country enjoyed this week in their classrooms.
On Monday, after our Table Top time, and a focussed Mathletics session, we went to the supermarket to stock up on supplies for our science project this week. We also bought cake ingredients and then I took the boys swimming at the public pool, which was very quiet. They are all increasing in confidence in the water, and enjoy swimming very much. We did some baking when we got home. This week Junior Masterchef is on CBBC, & the boys have been waiting to watch that. In the evening, my eldest son went to his regular cycling club.
On Tuesday, we started our science projects on growing. We planted beans and mung seeds in various conditions, made bean mazes and put some white flowers into different coloured water to see if they will change colour. My middle son planned a picnic lunch and we popped to the shop to buy what we needed. We then took the picnic out with some friends to some local woods which are carpeted with bluebells at this time of year. 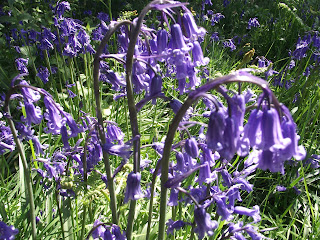 The boys watched Junior Masterchef again, and decided they will hold their own competition so began planning their menus. My eldest son had a friend to play after dinner, as my husband teaches his Dad English. They played on the Wii a bit - but only after we had all had our regular Tuesday night language session with Muzzy!
On Wednesday we went to our local Home Educators' Support Group in Stafford, which is a 30-40 minute drive from home. But the boys were excited, because this week there was a man who had come to tell the children all about newts. He had brought various types of newts with him, and a frog, all of which he had caught that morning, and he had lots to tell the children about the lives of these creatures. They were then all able to handle a newt - if they wanted to! After lunch, he had a couple of competitions - a quiz and then a drawing / writing challenge - and several children won signed copies of his book about newts, including my middle son, who tried really hard to win one, and was so delighted to do so. 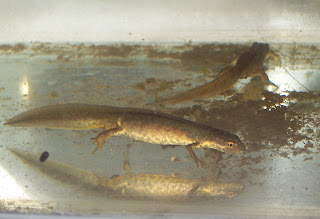 On Thursday, a beautiful May morning, we went to our local park where a Bug Hunt had been organised for Home Educating families. There was a good turnout - I think this was a surprise to everyone, as you can feel like a bit of a lone ranger .... A number of activities had been planned for the children - who ranged in age from babies up to perhaps 15 - which involved walking around the park and looking for bugs in various habitats. We found a few interesting things - including an orange tip butterfly. My youngest son was so happy wandering around with a magnifying glass! We finished up with some pond dipping, and here the elder boys came into their own, leading younger ones in fishing adventures. 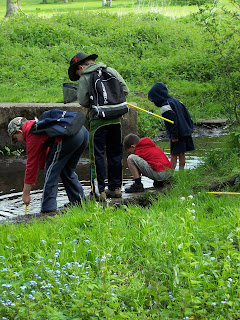 Quite a few minnows and tadpoles were caught and examined ... and quite a few of the lads went home with wet feet! But how refreshing not to have to worry excessively about health and safety, and to see these boys getting on together, working as a team and enjoying themselves in the great outdoors. In the evening, all three boys went to their regular karate class, which they love.
On Friday, I run an International Women's Group in a local Children's Centre. I have started taking my youngest son to spend the morning with my parents, where he enjoys playing, creating art and crafty projects &, best of all, relishing some exclusive attention from his grandparents! The elder two come with me to the Children's Centre where they generally help out in the creche with the younger children. They are also our official group photographers! This week, the session was led by one of the Polish ladies who had prepared some Polish food, and my middle son, who is a real foodie, enjoyed tasting that. I like the fact that the boys can mix with different people and hear about different countries and cultures. I had jobs to do in town in the afternoon, so my eldest son stayed with my parents whilst I took the younger two with me, then my middle son to his regular gym class. My youngest son and I ran a few more errands before dinner. Friday night is always movie night in our house - complete with popcorn!
Of course, with home education, the weekend is just another day - except with Dad at home! Learning opportunities do not stop! My husband and middle son went off to play tennis at a club this Saturday morning, then they joined my Mum and eldest son to help out at a bring-and-buy sale at our church to raise funds for charity. This had been organised by a few of the children. I took my youngest son to a birthday party at a soft play centre with a number of friends he made during his brief time in the local nursery class. He had a fantastic time. After lunch at home, it was time to give the house a good tidy up and then I put the hoover round while the boys chilled out a bit. Saturday night is Games Night - so we played a few card games together before bed.
Hopefully that gives you an idea of what a Home Educating week looks like. Basically, it is just Life - shared! You will see the boys have quite a number of opportunities to mix with other children. One concern people express about home educated children is the lack of opportunities for socialisation. It might take a bit more planning and effort, but maybe being in a classroom with 29 children of the same age is not the only way to socialise?