Maybe it is the beautiful summer weather which has made this week a good week .... More time spent outdoors, a more relaxed approach to life and the whole home schooling business. Maybe it is the fact we have had three fantastic days out - all at minimal cost and with minimal crowds. Certainly I have rediscovered our nearest city - where I lived some years ago before I had children - and so have been reminded how great it is to live in a small town with fantastic countryside in one direction, and a fantastic city with all the cultural richness that offers us, in the other!

On Wednesday we visited Plantasia near Atherstone using Tesco Clubcard vouchers, which can be exchanged for free days out! There we found Maze World - a series of mazes with various country themes. The boys each had a card and had to collect a stamp from the centre of each one, which kept motivation and persistence high. We had the play area completely to ourselves and had a picnic lunch before discovering the Wild Walk, again armed with cards and in search of stamps, which meant few corners of the woodland remained unexplored. There was a treetop walk, deer, alpacas and other small animals to look at, lakes and a den-making area. All in all, a good day in the open air. 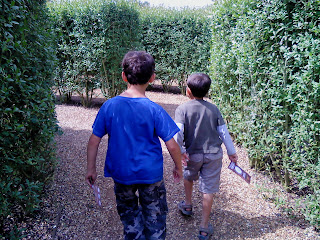 On Friday, our Home Ed Group had a booking for the Symphony Hall in Birmingham to hear the orchestra play Rimsky-Korsakov's Scheherazade - The Tales of the Arabian Nights. One of the other mums, a music teacher, had given the children a brilliant introduction to this music in preparation for the concert, and with great seats, we had a wonderful view of the orchestra whose performance, with occasional commentary, kept the children spellbound for the hour it lasted. 'Was it good?' my eldest son was asked afterwards. 'No ..... it was FANTASTIC!' he replied. And it was!

We went to Birmingham cheaply on the train, and spent the morning in the Museum and Art Gallery where we discovered the Natural History Museum's robotic dinosaurs on tour in an exhibition entitled 'T-Rex - the Killer Question'. We think of this huge dinosaur as a predator, but as the children went round the exhibition, they were encouraged to consider the evidence and decide whether they thought T-Rex was actually a predatory hunter or a scavenger. Again, this held the boys' attention, and they were wide-eyed at the sight of these awesome dinosaur reconstructions. So all-in-all, another great day out! 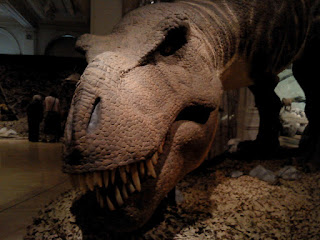 Keeping with the theme of The Arabian Nights, we returned to Birmingham the following morning to see the Theatre of Widdershins' magical production of the tales using puppetry and storytelling. Followed by a picnic and play in the adjacent park, then an afternoon visit to family in the city, it was another successful day out in the sunshine.

There's nothing worse than planning a day out, and then having it all go wrong! But 3 good days out have left me thinking maybe this home educating lark ain't so crazy after all!